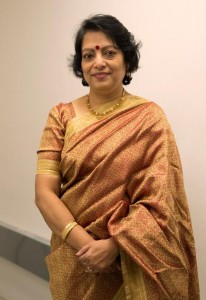 Ballari is trained in Hindustani Classical Music and gained her diploma in Tagore music from Bengal Music College in Kolkata. Amongst her tutors were Prasad Sen and Rajib Ray. Whilst living in Kolkata she has performed in some high profile music festivals on a regular basis. Since moving to UK, Ballari has pursued her passion for music and performed extensively throughout UK in Manchester, London, Sheffield, Hull, Birmingham & Nottingham. She is also the co-director of Moksha and masterminded a previous Moksha production- AMAR PREM- Immortal Love based on the Indian myth of Radha & Krishna. It was a project with the involvement of Bharatiya Vidya Bhavan Manchester and also second generation Indians in Northwest and Midlands.

Ballari has also been the driving force behind Rishi and also Moksha, constantly developing the organisation so it can reach a wider audience. She has now begun teaching those that are interested in learning Rabindrasangeet, covering various aspects of this genre of music. The classes are held in Manchester.

Moksha literally means- ‘salvation’ and we believe one can attain enlightenment through the wonders of music, literature and dance. Moksha is an Indian Arts Organisation based in the UK and aims to generate new ideas, new understanding and fresh creative forms through Bengali music, Indian classical music and dance.