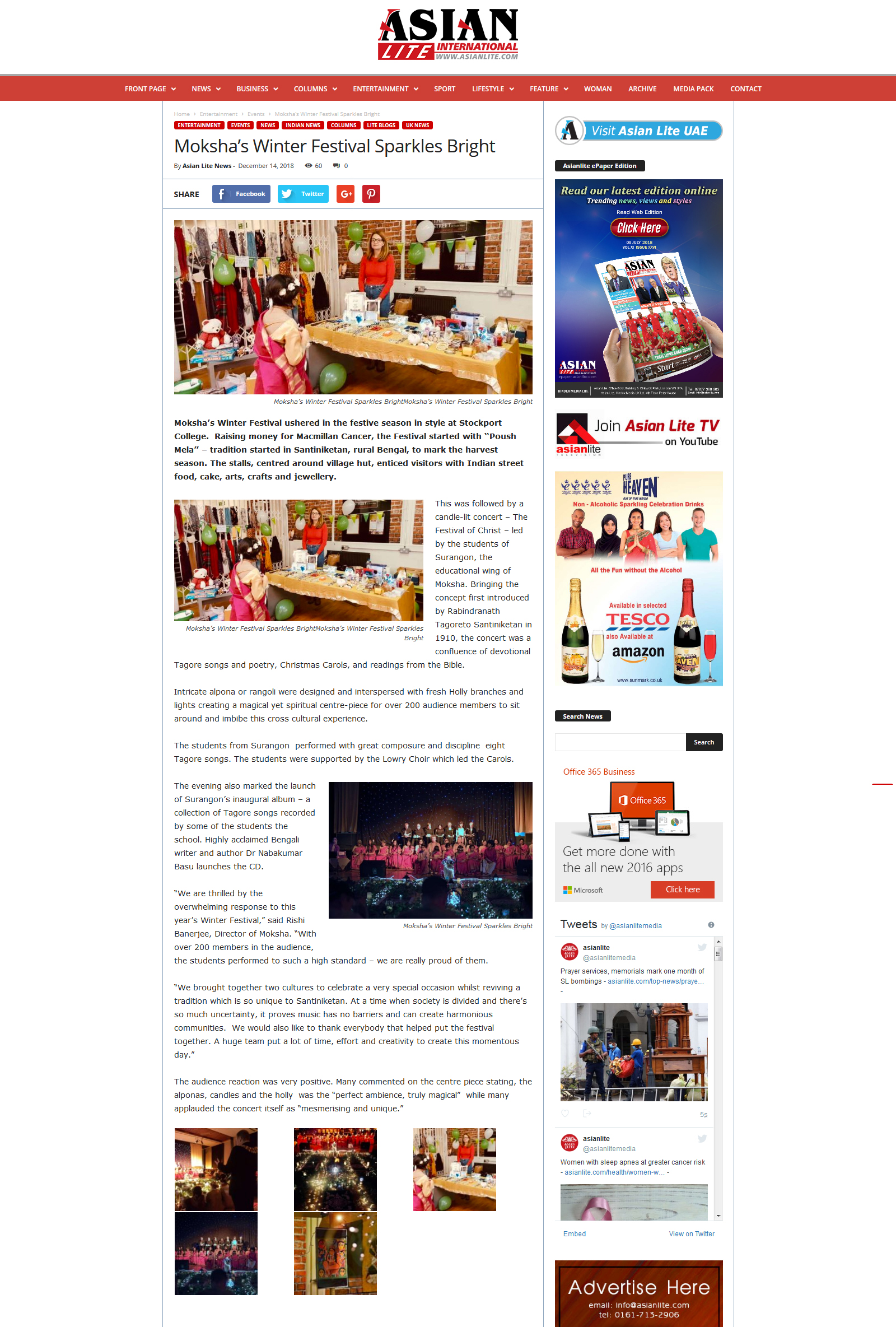 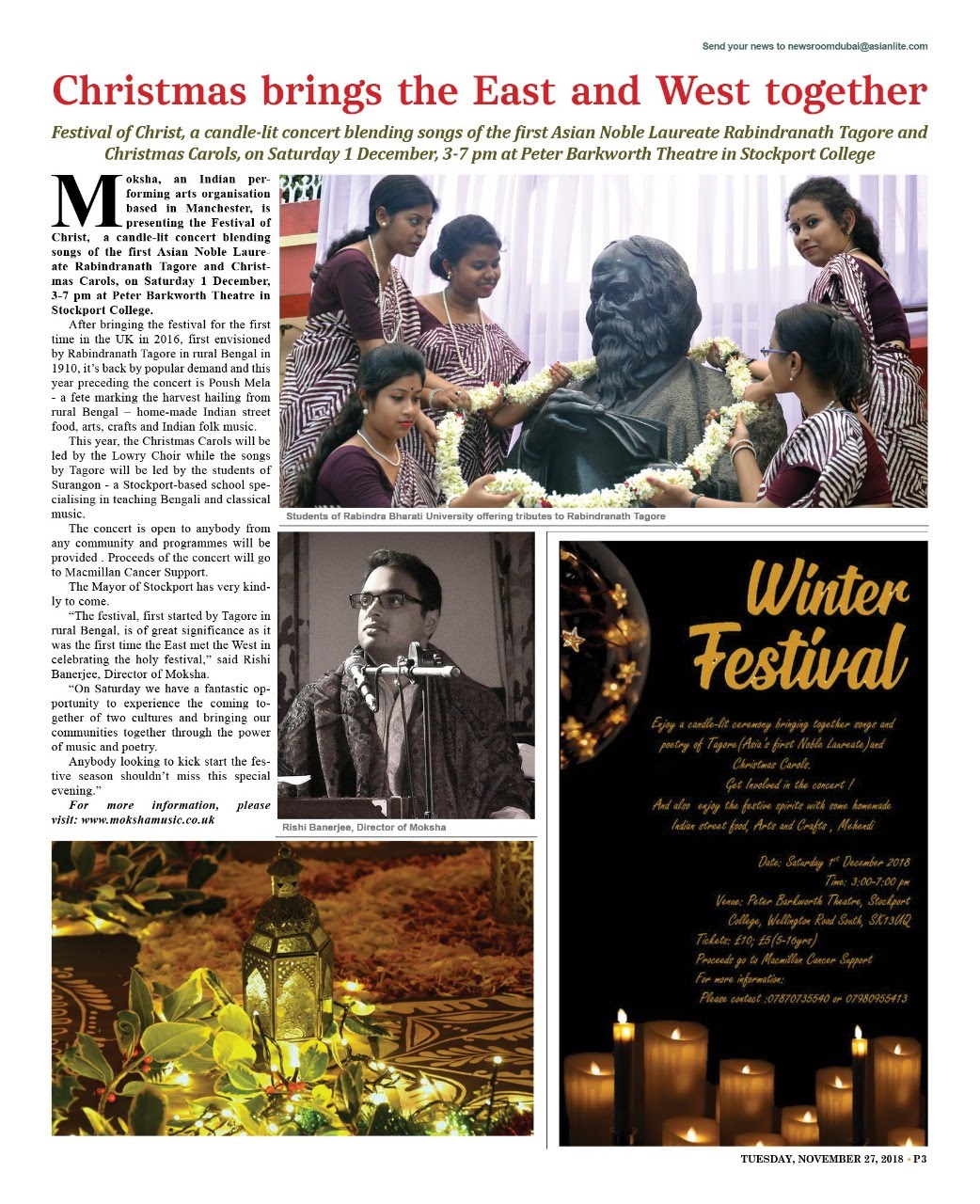 Memoirs of Gitanjali by Moksha on Saturday 7th June 2014 at the Royal Northern College of Music
http://asianlite.com/news/local/manchester/gitanjali-in-manchester-3/

Sharmila due in Manchester
Published by: Asian Lite Newsdesk2014/05/13 10:21 AM
sharmila-tagore-newscruze (Medium)

Check the link- http://asianlite.com/news/local/sharmila-due-in-manchester/
The renowned actress Sharmila Tagore is to perform in Manchester for the first time at Tagore Utsav, organised by performing arts organisation Moksha at The Royal Northern College of Music (RNCM) on Saturday 7th June 2014.

Celebrating the centenary of Rabindranath Tagore receiving the Nobel Prize for his works ‘Gitanjali,’ (Song offerings), Sharmila Tagore, the great grandniece of the poet, will be narrating the journey of the poet winning the coveted prize. The journey will be interspersed with English poetry and the original Bengali songs and will be performed by Moksha’s Artistic director and rising vocalist Rishi Banerjee.

"It is befitting to be presenting the globally renowned Sharmila Tagore, the great grandniece of the bard, when celebrating the centenary of his Nobel Prize award. Gitanjali was an iconic piece of work which opened dialogue between East and West. This dynamic project hopes to continue his legacy."

Sharmila Tagore made her debut at the age of 14 under the watchful eye of director Satyajit Ray in ‘Apur Shongshar’ before establishing herself as a popular Hindi film actress with Shakti Samanta’s Kashmir Ki Kali in 1964. Her hit films include: An Evening in Paris (1967), Aradhana (1969), Amar Prem (1971), Daag (1973) and Safar (1970). Her awards include the Filmfare Best Actress Award for Aradhana, National Film Award for the Best Actress for Mausam, Filmfare Lifetime Achievement Award and Star Screen Lifetime Achievement Award, amongst others. She also received the highest national honour from the Indian Government – ‘Padma Bhushan.’ Apart from acting, she remains, actively involved in the arts while fulfilling her duties as a UNICEF Goodwill Ambassador.

Tagore Utsav will also be featuring a collaboration between the Moksha choir and students from Surangon – school of Bengali music based in Manchester. The choir, bringing together women from faith communities across Greater Manchester, will be performing alongside the premiere music school Surangon led by Rini Banerjee. Tickets for Tagore Utsav are on sale now. Admission is £25/£20/£15 while children under 12 go for: £7. For more information or to book tickets, please visit: http://www.rncm.ac.uk/ or visit: www.mokshamusic.co.uk

We are delighted to welcome some of the members of the Sacred Sounds choir formed at the Manchester International Festival. They will open the evening with three songs by Tagore! Here is a little bit about them: https://www.youtube.com/watch?v=m9X35MU1g4U

For other press enquiries, please contact the Moksha team on 07980 955 413 or e-mail: infomoksha@gmail.com

Moksha literally means- ‘salvation’ and we believe one can attain enlightenment through the wonders of music, literature and dance. Moksha is an Indian Arts Organisation based in the UK and aims to generate new ideas, new understanding and fresh creative forms through Bengali music, Indian classical music and dance.